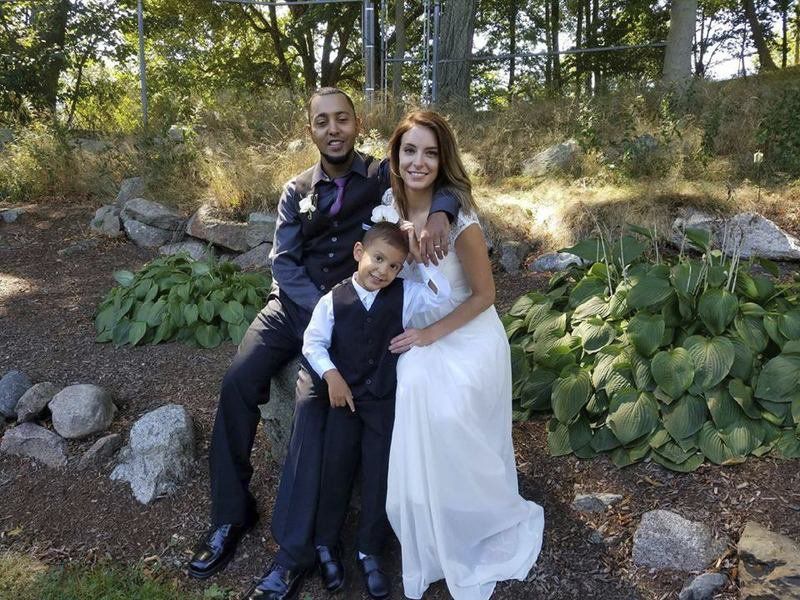 Fabiano de Oliveira with his wife, Karah, and their son, on their wedding day in 2016. Fabiano, an
undocumented immigrant living in Beverly, has been held by immigration officials since Jan. 9.
Courtesy photo

BEVERLY — Congressman Seth Moulton is working with the attorney of Fabiano de Oliveira, the Brazilian man who was living in Beverly and detained by immigration authorities last month while trying to begin the process to legally become a citizen.

Oliveira’s attorney, Jeff Rubin, praised the congressman for being someone “willing to stand up.”

“It shows a lot of courage that he would offer his assistance and that’s what’s been communicated to me, that he’s willing to help in any way,” Rubin said.

Oliveira remains behind bars in Plymouth County Correctional Facility in Plymouth, a maximum security prison that also houses those arrested by U.S. Immigration and Customs Enforcement.

Oliveira, 33, worked as a painter and lived in Beverly with his wife, Karah, and their 5-year-old son until he was detained on Jan. 9. He and Karah were at the U.S. Citizenship and Immigration Services office in Lawrence for a marriage petition interview – a first step into obtaining legal residency – when he was taken.

Matt Corridoni, Moulton’s press secretary, said that while the congressman’s office has reached out to Rubin and is working with him on the case, he couldn’t give specifics. Moulton was not available to speak to the press Thursday.

On behalf of Oliveira, Rubin said he’s been having discussions with the U.S. Attorney’s office, as well as others that represent the government, and they have had an open line of communication with him. He said it’s “encouraging,” as far as the case goes.

“Someone without any threat to the community or any risk to the community, somebody who is just a hardworking father like Fabiano, that is an outrage that they are taking people into custody like that,” he said.

Messages to U.S. Immigration and Customs Enforcement were not immediately returned yesterday.

While Karah de Oliveira thinks Moulton’s involvement is “amazing,” the couple’s son just wants his dad to come home. She told him his dad is away on a business trip as a means of protecting him.

“Yesterday (Wednesday) was a tough day for him,” she said. “He woke up in the morning missing his dad. He was just saying, ‘Daddy doesn’t work this long, where is he?'”

Karah de Oliveira said she hopes her husband is released soon and her son won’t have to know the reason for his dad’s disappearance until he’s older.

“Even if he does find out, his dad didn’t do anything wrong,” she said. “Life can just be tough sometimes and unfair, but that’s just the way it is sometimes.”

While her husband’s been away, Karah de Oliveira continues working full time. The community has been supportive, she said. Some people have offered to babysit the couple’s son, while others have said they could pick him up from school.

An online crowdfunding campaign has also raised over $3,000 in three days with a goal of $5,000 to help the family while Oliveira is detained, and can’t work or provide child care.

Karah de Oliveira’s also heard from the families of other undocumented immigrants who have shared their concerns for their loved ones.

She spends a half hour each morning and night, talking to her husband on the phone. All of the conversations happen via collect calls, which costs $12 a day.

“He’s doing OK,” she said of Oliveira. “Even though it hasn’t been that long of a time, it’s the same – he misses us.”

Oliveira misses their son and just wants to be home with his family, Karah said.

But he also has hope. Hearing about a protest at the immigration office in Burlington demanding his release lifted his spirits, Karah said, just knowing that people, those who don’t know him, went out of their way to support him.

While Karah de Oliveira said she’s lived in Beverly her whole life, she wasn’t involved in the community. She wants that to change.

“Hopefully I can give back, too,” she said. 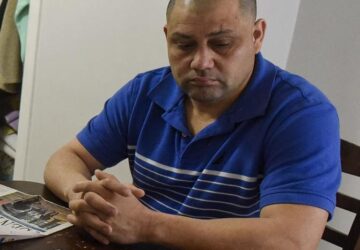 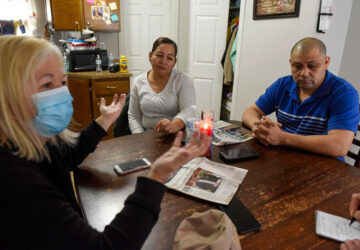